Contraceptive Options: What Types are Available? 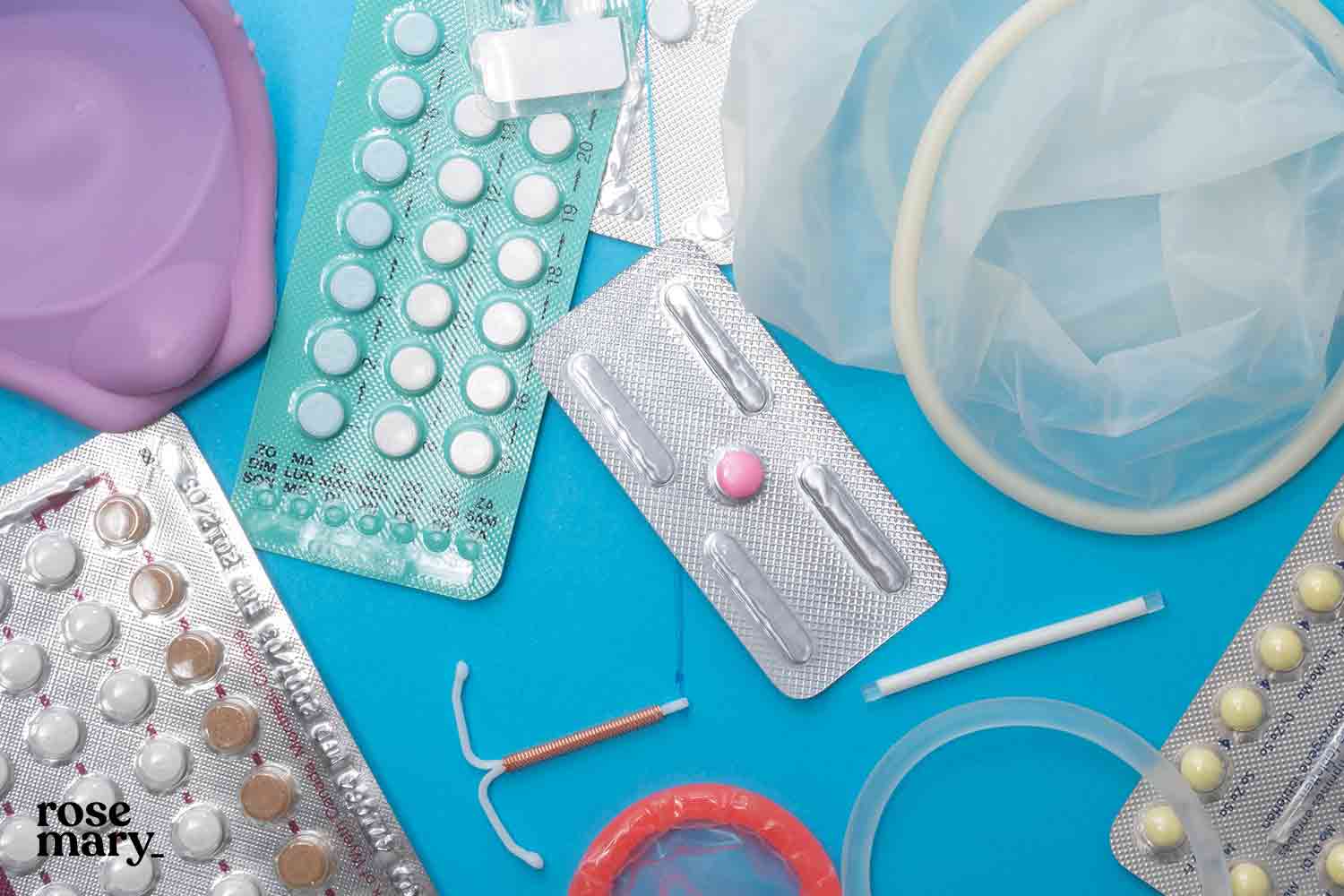 No matter the reason for wanting to prevent pregnancy, choosing the right forms of contraception for your body and needs is an important decision. There are a variety of contraceptive options available for both men and women, ranging from oral medications for women like the birth control pill to male birth control options like condoms and vasectomies. We cover some of the most common contraceptive types to help you during your research process.

Before we dive into the individual types of contraception you can choose from, it’s helpful to divide them into two categories: hormonal and non hormonal birth control. ‍

We’ll start with some of the most commonly used forms of contraception in women:

The combined pill has a combination of synthetic hormones: estrogen and progestogen. The combined pill works to prevent pregnancy by stopping ovulation during a monthly cycle. Without an egg to be fertilised, a woman cannot get pregnant. It also thickens the cervical mucus to prevent sperm from entering the womb, while simultaneously thinning the uterine lining to prevent eggs from implanting.

The mini pill is progestogen-only and helps prevent pregnancy by thickening the cervical mucus to make it more difficult for sperm to enter the uterus. It also thins the lining of the uterus to prevent implantation.

There are many other benefits of the contraceptive pill aside from preventing pregnancy, including making periods lighter and reducing cramps and pain as well as managing hormonal acne.

When used properly, the birth control pill is 99% effective, making it one of the most effective forms of contraception available for women.

How to use the pill for contraception

Regardless of which type of pill you take, you need to take it every single day at the same time. When taken perfectly, it is 99% effective at preventing pregnancy. However, nobody’s perfect and more “typical” usage brings the effectiveness rate of the pill down to about 92%.

The pill does not protect against STIs.

Intrauterine devices (IUDs) are becoming increasingly popular amongst Australian women. They are T-shaped devices that are inserted into your uterus to prevent sperm from getting to eggs, thus stopping pregnancy. They are effective and reversible long-term forms of birth control (commonly known as LARCs, or long acting reversible contraceptives), lasting 5 to 10 years depending on the type. There are two types: hormonal IUDs and copper IUDs.

As the name suggests, hormonal IUDs have hormones in them. It slowly releases a progestogen hormone into your uterus, causing the mucus in the cervix to thicken and stop sperm from reaching or fertilising an egg. It also thins the lining of the uterus and partially suppresses ovulation. All of these together make the hormonal IUD a very effective form of birth control: over 99% effective.

Many women with IUDs stop getting their periods, or have a very light regular period or irregular vaginal bleeding. The hormonal IUD can be a good choice for women who can’t take estrogen since it only has progestogen in it.

The copper IUD is also effective at preventing pregnancy but does not contain any hormones. Instead, it has a fine copper wire that is wrapped around the plastic frame. The copper is toxic to the egg and sperm, which stops sperm from fertilising the egg. It also makes the uterine lining thinner to make it unable to support a fertilised egg. Copper IUDs are also over 99% effective in preventing pregnancy. Once implanted, a copper IUD can last for up to 10 years.

Copper IUDs are a good choice for women who want the benefits of the IUD but want a non hormonal form of birth control. However, copper IUDs can cause more heavy vaginal bleeding, irregular bleeding and pelvic pain. If you’re thinking about using a copper IUD for non hormonal birth control, it’s important to be properly assessed by a doctor beforehand.

How to use IUDs for contraception

You will need to see a doctor to have an IUD put in. After your doctor has performed a pelvic exam and evaluated your health and determined that it is appropriate for you to have an IUD, you can have your IUD inserted during your menstrual cycle. It takes about 10 to 20 minutes and may be uncomfortable or painful.

IUDs do not protect against STIs.

The shot is an injectable form of hormonal birth control that contains synthetic progestogen. It is sold under brand names Depo-Provera and Depo-Ralovera in Australia. Women who choose to get the shot for contraception have to go to the doctor to get the jab every 12 weeks. Because the shot contains progestogen, it works similarly to the hormonal IUD and the mini pill. It prevents your body from ovulating and releasing an egg, while simultaneously thickening the cervical mucus, thus keeping you from getting pregnant.

How to use Depo-Provera for contraception

You will need to see your doctor every 12 weeks to get the jab. Depo-Provera is 99.3% effective at preventing pregnancy when administered on schedule every 12 weeks. Some women prefer this option to taking a daily pill or having a device inserted in them, but the downside of using Depo-Provera for birth control is that you have to physically go to the doctor and make sure you stay up-to-date with your appointments.

Depo-Provera does not protect against STIs.

The vaginal ring, sold under the brand name NuvaRing in Australia, is a soft plastic ring that you put inside your vagina. It releases estrogen and progestogen to prevent pregnancy in a similar way to other forms of hormonal birth control: it stops ovulation from happening and thickens the cervical mucus to make it more difficult for sperm to make it to eggs to fertilise.

How to use NuvaRing for contraception

The vaginal ring stays inside your vagina for 3 weeks. When you take it out for a week, you’ll experience withdrawal bleeding like a period. After this week is over, you put a new ring in for another 3 week cycle. It’s possible to skip your period week by putting a new ring in straight away instead of waiting a week in between rings.

When used correctly, NuvaRing is 99.3% effective at stopping pregnancy. However, if you forget to take it out or put it back in time, the efficacy rate lowers to 93%. The NuvaRing is a good choice for women who don’t want to remember to take a pill everyday. The NuvaRing needs to be stored in the refrigerator until it’s time to use it.

However, NuvaRing does not protect against STIs.

Diaphragms are a barrier method of birth control for women. They are made from a soft silicone and contain spermicide to kill the sperm and keep you from getting pregnant. It fits inside your vagina and covers your cervix to block sperm from entering the womb. In Australia, Caya is the brand name diaphragm available. When used correctly with spermicide, diaphragms are 92 to 96% effective at preventing pregnancy.

How to use diaphragms for contraception

In order for diaphragms to stop pregnancy, they must be used with spermicide. You insert the diaphragm into your vagina, ensuring it’s covering your cervix, before having sex. It needs to be left inside you for at least 6 hours after sex. Diaphragms are reusable for up to two years and are a good option for women who are looking for non hormonal birth control. However, continual use of spermicide can disrupt your vaginal flora and microbiome.

Diaphragms do not protect against STIs.

Condoms are a type of barrier contraception that men can use for birth control. They are typically made out of latex, but can also be made from polyurethane or polyisoprene for those with latex allergies. Condoms are put on the erect penis to keep sperm from getting inside the vagina. After it is unrolled to the base of the penis, there is a little bit of room in the tip for the semen to collect after ejaculation. This extra space makes it less likely that the condom will break.

Condoms are 98% effective at stopping pregnancy and protecting against STIs like chlamydia, gonorrhea, HIV, syphilis and genital herpes. They need to be used from the very beginning to the very end of sexual intercourse activity to reduce risks of STIs and adequately prevent pregnancy. Otherwise, the expected efficacy of condoms reduces down to about 85% due to human error.

A vasectomy is an operation in which the man’s vas deferens, the tubes that connect the testicles to the penis, are cut or blocked to prevent sperm from being released during ejaculation. Vasectomies are one of the most effective forms of male birth control: nearly 100% of the time. After a man has a vasectomy, the existing sperm needs to clear out of his system before it’s safe to have unprotected sex. This process can take up to 3 months.

While vasectomies are considered permanent, they are theoretically reversible. However, because the vas deferens have been cut or blocked, it’s not guaranteed it can be reversed to allow sperm to flow through again.

With so many different kinds of contraceptive options out there, it’s important to understand the pros and cons of each one to choose the best ones for your needs.

If you’ve chosen the contraceptive pill and have taken it before, you can get your rescripts online and have the pill delivered through Rosemary. Our subscription annual care plans make it easy for you to consult a doctor online, get a rescript and enjoy free shipping for an entire year. Never miss a pill again! Start your visit for getting the pill online today.